3 Things Every Child in a Blended Family Must Have

I used to hate that one line from that one Disney movie that says that one thing about family and no one getting left behind. You know which one I’m talking about, right?

“Ohana means family. Family means no one gets left behind.”

That movie with the beautiful tropical setting has a great lesson for viewers, but a less than picturesque, painful pinch for those who have been left behind. For many years I felt “left behind”. My dad went off to the military, and my mom moved out with her new boyfriend. When they had a child together they became a family. Sure, the new boyfriend tolerated me, but I could tell that I was somewhat of an afterthought. An extra – often left behind.

While I was up in my room I could hear them laughing, watching movies and playing together. They were a unit, and even though I was present – I was invisible.

I remember trying to make conversation with the boyfriend. He would dismiss me by never looking up from his activity and telling me to go talk to my mother. I would try to talk to my mother, but she was focused on her boyfriend and telling all her friends about him. I had a sibling who was very aware that she was the object of their affection, and that if it was between she and I – we both knew she would always be the choice.

I was abandoned by people who were with me every day. They only saw me when I did something wrong.

They didn’t intentionally set out to hurt me. They didn’t intend to make me disappear – but they did. This is not a magic trick of vanishing acts, but rather it is my story. My story is not one of the horrors of abuse that others have lived through.

My story is the chronicle of the dull pain that nags at a heart for years because no one cared enough to include me. My story is the backdrop for the internal vow that I set when I was a teenager that, “I would NEVER have children. I never wanted any child of mine to feel the pain of abandonment I felt while being present with the person who was supposed to love me most.

Blended families have a task that is monumental! If anyone says it is easy or instant they are either experiencing a miracle or lying. I share my story with you because there are children that may not be your biological children, who are struggling with life questions that you can either help or hinder. Here are three gifts that children of blended families need that you may not be aware of:

I’m begging you to be intentional about unity. I cried myself to sleep many times and not one person noticed my tears. I sat alone in a room with a television while the rest of the house spent time together. I grieve those times, but not as those who have no hope. That grief moves me to go to my daughter’s room and ask her to tell me about the pictures she drew. That grief moves me to take my son’s offers when he asks me to dance to the overhead music in the grocery store. That grief draws me to children who withdraw themselves from others – whose pain has kinship to mine that we both recognize.

Inside each of us we long to be recognized. We want to be cherished, treasured and loved. God has given families the ability to meet those needs as we point every heart in the house back to Him. Make the effort to connect and unify your family – no matter the back story and no matter how long or short you have been working at the Ohana mission statement. After all, “Ohana means family. Family means no one gets left behind.”

What are some ways you give attention, respect or time to the children in your family? Share below with a few comments. (Don’t be stingy with your wisdom – we want to hear from you!) 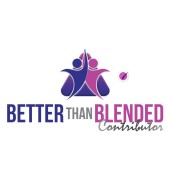 The Importance of Building Family Traditions!

How Step Parents can Learn to Love Bio Parents

Join us as we Fast for our Blended Families!