An Excerpt from 40&7: A Practical Guide To Having Peace During A Custody Battle

One of the most mentally and physically exhausting experiences I have had to date was going to court and fighting for nine months for custody of two of my seven children. This process was painful on so many levels. The ugliness and frustration of it all consumed me. Each time I thought it was almost over, some new accusation or threat came up. I was completely discouraged and often wondered, God, where are You? Do You see what’s happening to me? I knew that God could work everything out and allow the truth to come forth, but I often had the lingering doubt, I know You can do it, but will You do it for me?

That question became the source of so many tears and doubts—and supernatural experiences with God.

One day God began to show me that I had allowed past experiences to shape the belief within me that He would not defend me and that I would not experience true victory in my circumstances. Prior to this huge custody battle, I had gone to court for other issues—my divorce, child-support matters, and small modifications to custody details. Each time I went, I walked away feeling completely defeated and discouraged by the outcome. And each time I felt that way, I unknowingly became less and less confident in God’s desire and ability to bring about a true victory in my situation. I looked for Scriptures to encourage me, and at times certain verses helped me, but most times my brief moments of feeling better were just a smokescreen for how I really felt: defeated.

So when the most recent court request turned into an all-out custody battle, my doubts, fears, and lack of trust in God came fully to the surface. There was no hiding or disguising them now. It was clear: I didn’t trust God as I said I did and encouraged others to do. I wanted to. I wanted the peace of knowing that God wouldn’t allow anything to happen to me or let my children be taken from my care. I wanted the calmness of spirit and soundness of mind that would let me function on a day-to-day basis as if nothing difficult was going on. But even though I knew that trusting in myself and my preferred outcome was a bad idea, I fell into the trap of doing it anyway. For months I leaned on my own understanding, fully aware of God’s Word but struggling to apply it in my situation and in my life.

To Continue reading 40&7 How to Have Peace during a Custody Battle Pre order your copy today and get an amazing discount and free shipping with Coupon Code: FREESHIP!

GET MY COPY NOW 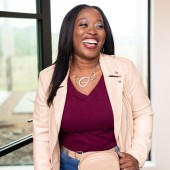 Blessings, Not Baggage: How Stepmoms Really Feel About Marrying a Man with Kids

How I Learned To Fight with My Spouse and WIN Every Time!

Freedom for the Overwhelmed Stepmom