When You’re Tired of Being A Stepmom, Become A Rebel!

The world tells me to be bitter and angry, to throw in the towel when the road gets tough. Emotions flare, events happen and the world says fight back! Put your fists up! The world screams loudly for revenge. But I say, “When You’re Tired of Being A Stepmom, Become A Rebel!”

I am a Jesus loving stepmom and the stakes are high. – Emily Jordan, Joyful Stepmom

I’m not here for revenge, I’m not interested in putting up my fists.  As a Christian, my stepmom journey is uncommon.  God calls me to a different standard.

Jesus was such a rebel in his community. He spent time with outcasts, went against the grain and broke social norms. I just love it! Read Matthew 8 in which Jesus touched a man with leprosy to heal him. Jesus touched him! This would have been outrageous. People with leprosy lived in separate colonies. It’s a highly contagious disease and was feared. The world says to stay away from the outcasts. What did Jesus do? He touched.

Come back to our lives as Jesus loving stepmoms. The texts are flying; it was a hard day with the kids. You received court papers in the mail. That child support check stretched the budget too thin.   Maybe your marriage is strained and the “D” word is being tossed around.

Break those societal norms. We already know what the world says. Call it a day and give up. Boring! That’s not rebel material! But in all that they say, remember, Jesus called you to something far greater.

I love the example of Jesus healing the leper. For stepmoms and biological moms, the idea of speaking to each other or being near each other is a tough one. Being nice to each other? Hold on there, sister! The world tells me to mark my turf, that I don’t have to work with this woman or do anything I don’t want to. Jesus? Well Jesus touched a leper and healed him. I think I can handle sitting together at school events, speaking kindly in a text. Jesus reminds me that this is the mother of my stepchildren. I need to speak and act with compassion.  Am I good at it? There have been some moments the world has won and moments Jesus kept me close. My family always benefits and grows when I stick with Jesus.

I can hear you saying, “Emily, that’s such a feel good story but things are bad here!” I know. And I reply, “Remember the Cross?” The horrifying abuse and insults. Jesus’ own friend betrayed him. He could have stopped it at any time. He could have thrown in the towel and said forget it, they aren’t worth it. But He didn’t. Do not twist my words, I am not advocating staying in an abusive situation. Read the end game here; His overwhelming love and the example Jesus set for us. It got tough, really tough, but He stuck it out. Being in a step-family can be really hard at times. There’s no sugarcoating it for some of us. But I encourage you to stick with it. Your family is worth it.

Every one of us will come to a point in her spiritual journey when the “step-family” storm takes over and you have to make a choice. You listen to the screaming of the world or you can break the norm and follow Jesus. I am praying for each of us to be rebels when that moment comes. 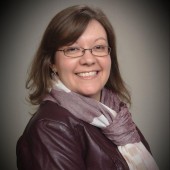 Emily is a Wife, Dog Mom, Coffee Addict- and Stepmom to the most amazing Teenager. The Joyful Stepmom was founded in 2013 as a place of encouragement for Christian stepmoms. She currently serves on the Advisory Board for Stepfamily Systems Co-Parenting Center.

Debunking the Myths around Summer Visitation

Be Faithful Where You Are

Victorious Defeat: A New Perspective on Court Battles with an Ex